Get fresh music recommendations delivered to your inbox every Friday.
We've updated our Terms of Use. You can review the changes here.

You're A S​é​ance, Old North

by Look To The North 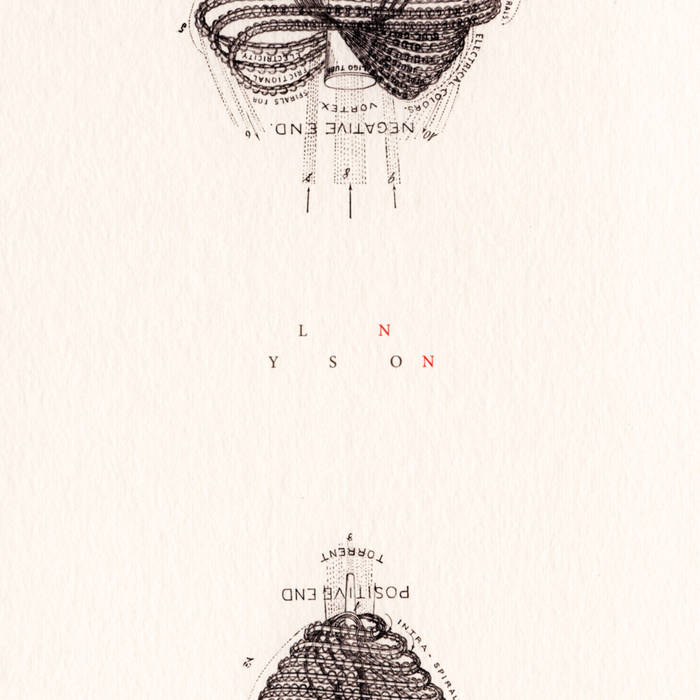 'Look To The North, a long distance collaboration between Ireland's David Colohan (United Bible Studies, Raising Holy Sparks and Agitated Radio Pilot) and America's Zachery Corsa (Lost Trail), have previously impressed with their debut '5000 Blackbirds Fall Out Of The Sky', a beautifully detailed slice of psych folk ambiance. It is a significant degree of expectation then that greets 'You're A Séance Old North', which is repaid handsomely and repeatedly throughout what is a unique and truly special recording. This is an album that lives in the hinterland, the twilit liminal space between seasons and seems purpose made for the chill autumn sunsets and approaching winter darkness.
Essentially an album of two instrumental extended pieces, albeit with many subtle changes and junctures ebbing and flowing throughout, this is a deeply immersive album in which the listener can crawl into and inhabit for the space of its duration. And you will want to do so time and again; the opening track, the excellently titled 'Where You Vanished Off The Edges Of A Cul-de-sac, Like Falling Off A Map' feels like entering a hazy, blurred and slightly off kilter dream or memory. Choral drones drift and retreat amongst bird and cricket song, but this is no gentle or new age ambience, instead there is a pleasingly unsettling ‘Twin Peaks’ air to this landscape. Colohan's autoharp picks out a fragile, ghostlike melody as the drones recede into the sound of radio static and muffled, long forgotten voices from the past. Corsa’s piano then haunts the emptiness that remains until an angelic mellotron choir descends; this is a haunted house of an album, a subconscious filled with the sounds, tears and hopes of yesteryear, both sepia tinted and dust covered. Electronic pulses conjure a solar, electric wind upon which a solitary harmonium wheezes and weeps, a chance meeting of several possible timelines at once. Washes of old radio chatter and utterly lovely chiming drones and peals roll in like waves, not unlike a heavily slowed down Cocteau Twins, the music's quiet power utterly beguiling and bewitching.
An elderly man's voice enters and reflects biblically on the fate of the world before the second piece 'Harriet Was Here, Less So Now' begins with a whirring, looping vocal sample to be joined by piano, guitar and a growing torrent of static and feedback. Where the opening track was spacious and sacred, its sister piece is disturbed and storm wracked. All storms must break however and this soon quietens into delicately picked autoharp and further sampled religious dialogue which adds an unnerving post apocalyptic tinge. Wind and rainfall rise to the foreground, the sound of the woods and the creatures within reverberating, merging with spectral conversations and melodies that seem plucked from beyond the veil, as if the curtain between the worlds is thinner here, where this album inhabits. Footsteps on leaves are closely followed by an unearthly breathing, of something not human until the welcome static returns and the autoharp notes cascade like tears over disembodied recollections from voices from the distant past. Again, eerie and unnerving sounds weave through the woodlands, a wraithlike choir not far behind as dark, impenetrable waves of guitar and echoed howls grow to obscure all else. A lone voice emerges through the shortwave crackle to exclaim 'It's still here' and the transmission suddenly ends. Both unnerving and curiously beautiful this is an album that is also an immersive experience; the silence after it has finished feels loud and tangible, as if emerging from a hypnogogic or a wakened dream.
Both Colohan and Corsa are experienced and renowned composers and this album is rich with nuance, detail and gentle, emotive resonance. For those who admire the work of Richard Skelton, Richard Moult and Michael Begg's Human Greed, this is an essential acquisition. Special mention must go the exquisite packaging from AOsmosis Records; a limited edition stitched 16 page booklet replete with transparent and paper prints along with the accompanying poetry of Zach Corsa. Handmade and a genuine thing of beauty, Aosmosis have done themselves proud and a serious enquiry into their other releases is recommended.' Grey Malkin, The Active Listener

'In a sect of Japanese Buddhism called Shingon Buddhism, there was a small group of monks in the Northern Japanese Yamagata prefecture on Honshu Island that attempted self-mummification. They called those who succeeded sokushinbutsu 即身仏.
With the devotional, ambient gem that is “You’re A Séance, Old North“, David Colohan and Zachary Corsa (the duo that constitute “Look to the North”) knowledgeably execute a process of reverential and gentle archaeology. Layers are slowly peeled away, overlapping washes are carefully and slowly resolved, care is taken throughout and the tools of the trade (the autoharp, the field recordings, the shortwave and the confessional sound fragments) are employed with deftness and expertise to reveal a truth.
There is a balance to things.
There are two tracks here, each of 20 minutes length; the two musicians present these tracks to us with complementary structures and parallel instrumentation. Corresponding curating snippets of voice in each track (male in the first, female in the second) guide us through a journey of reflective discovery that is in the best traditions of the broad church of drone music.
In the wonderfully titled first track “Where You Vanished Off The Edges Of A Cul-De-Sac, Like Falling Off A Map”; a thick, undulating landscape of ambient swell dotted with a surface layer of soft field recordings unfolds before us. This is eventually and tentatively penetrated by distant but insistent voices, and through those first few cracks in the outer mantle of this album come the plaintive notes of a parlour piano escaping out to us, providing those first glimpses of evidence that something is waiting for us, something is to be found on this record. But not yet, with easy drama Colohan and Corsa re-bury those fragments, protecting them from the atmosphere like the dutiful guardians they are.
It is with the second track “‘Harriet Was Here’, Less So Now” that revelations come more readily. As if to prepare us for the fact that these revelations will be challenging, a warning note is sounded, and then we are through. Through at first to the realm of spectral drones and ghostly backward echoes such as one might expect to find under the surface layer of things, a last attempt by arcane sentries to stay our progress perhaps. But “Look to the North” beckon us deeper, we are brave in their capable hands and things soon become more resolved. The first lone bleached notes of acoustic guitar begin to poke through, melody follows. We are glimpsing the ribs of a long-hidden sokushinbutsu, and we begin to appreciate the value of the find as it is unearthed before us.
“You’re A Séance, Old North” uncovers things, it reveals ancient truths, it awakens dormant memories and it provides a mirrored surface that allows us to reflect and view our feelings of mortality more objectively. It leads us to a discovery, gently and kindly, but the interpretation of what we find must be our own and ours alone.' Jim Griffin, folkhorrorrevival.com

'You’re A Séance, Old North drifts around a property it’s claimed ownership of for centuries – the local woods. The music flits and circles the forest as well as the outskirts of the nearby township, and as it plays perceptions of reality slowly tilt and twist. Just off the main road, the mystical music lights up the otherwise dim shades of dusk, and the ambient-tainted fireflies produce tiny beacons of sound, their melodies glowing brightly.
As evening approaches, the music lightly brushes against the foliage of the enchanted forest. It wants you to venture further in, but some kind of sense warns you of an unseen presence lurking further inside, camouflaged by the trees and their thick bodies of rough bark. A thin drone runs through it, like a cool, effortlessly flowing stream. The wind whooshes and birds sing away, but they’re safely nestled up high. The sky’s like a torch preparing for midnight, burning the clouds away with an amber flame.
A light creaking and then a dislocated snapping sound cuts through the music, severing something close to your position. Despite the initial shock, the music is more like Willow Creek with its thrown rocks and strange, high-pitched calls than it is the legend of the Blair Witch and its disturbing disappearances, less of a terrifying, vengeful entity and more of an inquisitive creature. A tree bows down in death, and reality comes back into focus. It’s not only a beautiful, serene place but a dangerous one – both “Where You Vanished Off The Edges Of A Cul-De-Sac, Like Falling Off A Map” and “‘Harriet Was Here’, Less So Now” are otherworldly, their spirits fluttering in a draft created by its ghost box atmosphere. Interrupting the drafty drones are barely-there radio transmissions that seep through the music’s surface, and disembodied voices appear from nowhere, going nowhere.
Bone-dry keys play skeletal melodies, but like lines of dust they never have an opportunity to settle. This is an old house, one stuck inside a creased photograph, a place out of time which is disjointedly existing in the present. The stones that were laid here are still here, resting in peace, acting as a permanent epitaph around a tombstone entangled in weeds, broken brambles and ill roses. The music hovers over a frayed part of the eternal veil, with nothing but a black light emanating from the other side.
Look To The North is a collaboration between musicians David Colohan (Agitated Radio Pilot, Raising Holy Sparks, United Bible Studies) and Zachary Corsa (Lost Trail, Pines, Yearlings). Instrumental parts are added to light their way: a table harp, a mellotron, and a harmonium are all split and divided throughout the forty-minute experience, but they’re only passing through. They disappear, too, unable to sustain their presence in a cruel world. The serene, steady drone always finds a way to reappear; it’s a recurring circle, and one where instability (the intermittent radio) is counteracted by a perfectly balanced drone. This thoughtfully transcendent folk-drone isn’t afraid of camping out in the location of an urban myth.' A Closer Listen

'Less immediately frightening than its peers, this collaboration between Zachary Corsa and David Colohan builds a mood over the course of two side-long, collaged pieces, calling on the presence of ghosts and surviving witnesses, a la the latest season of American Horror Story. If it’s pretty in parts, don’t hold it against the duo: the gingerbread house was pretty too.' Music For Haunted Houses, A Closer Listen

Poem and photograph by Zachary Corsa