Hill Of The Moon 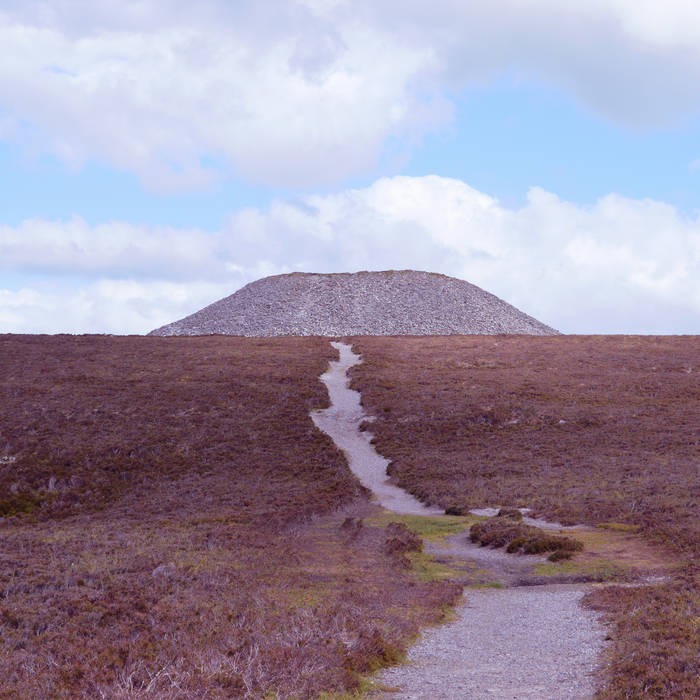 James Griffin The sound of beautiful things just down the road. Favorite track: The Ritual Seascape.

'Imagine If Popol Vuh lived in rural Ireland and were in thrall to the local landscape and folklore then this is how it would sound. A hypnotic, devotional work imbued with strange, inexplicable, almost Neolithic atmospheres..' Was Ist Das

'The ambitious and expansive 'Hill Of The Moon' is a new download and double cassette from the prolific David Colohan, known for several musical guises such as Agitated Radio Pilot and Raising Holy Sparks and well as being a central part of psych folk masters United Bible Studies. There is a strong argument for Colohan to be recognised as one our most important contemporary composers, his work ranges from the Popol Vuh-esque widescreen beauty of Raising Holy Sparks 'Sadhu' to the sublime chamber folk melancholy of his collaborations with Richard Moult such as 'Hexameron'. With this new release that argument grows ever stronger; this is a collection of hugely moving and transcendent passages that transport the listener to another time and space altogether, a place of stillness and eerie wonder that reverberates long after the album itself has finished.

Opening with the elegiac harmonium of 'Hill Of The Moon (Four Divinations)' it is immediately clear that the strong and immersive atmospheres that Colohan is known for are fully present, the track drifts in stately sorrowfulness before picking up pace, cascades of organ notes falling endlessly into each other. Both hypnotic and evocative, this solemn and hymnal approach reminds this listener of Nico's 'Desertshore' and Current 93's 'Sleep Has His House' with its melancholic grace. Angelic choirs then join, adding an unearthly yet sacred feel until the sound of crows and wild nature summon the ending of the piece. Next, 'Pinnacles' merges bowed strings with a cittern and sombre organ drones to create a lonely, ambient folk that conjures images of gulls and storm racked ocean skies. 'The Ritual Landscape' is well named, an epic musical illustration of a barren, winter scorched earth described by graceful and processionary organ and keyboard notes and drones. The track builds, layering and developing not unlike Brian Eno's 'On Land' in its view of the landscape as both ancient and spiritual. 'Medb's Cairn' ebbs and flows, harmonium notes curling around each other like low hanging rainclouds as the track processes down some anointed and symbolic pathway; if Alan Garner's Stone Book series had a recommended soundtrack this would be it. 'Rock's Fall, Raven's Circle' is a more ominous portent, the cittern re-emerging to provide icy slices of stringed tension amongst the birdsong and swirling keyboards. 'The Ritual Starscape' is a quieter, more reflective piece that utilises some of Colohan's collection of vintage synths to stunning effect, notes wails and ascend like shooting stars across an ink black sky, conjuring a new kind of folk music altogether; one hinted at by Coil's 'Moon Music' period and whispered by the likes of Richard Skelton, Nico and Fovea Hex. This is followed by 'I Sit Near The Moon', the cry of crows summoning in haunted strings and pipes, a ghost lament for the night shrouded countryside. 'Fourth Divination (Above The Radiant Lake)' is an expansive twenty minute work that is truly a thing of wonder. Voices and choirs cry out against the star filled expanse, church organ pierces the shadows and the sense of the liminal becomes ever more present; this music is almost religious in its intensity and wintry beauty and is hugely emotionally charged and connective. The slight 'Knocknarea' is a small but perfectly formed interlude of loveliness before album closer 'The Ritual Seascape' swells and foams into view. As circling and systematic as the tide, the omnipresent organ rises and falls to be met at different points by plaintive pipes, woodwind and the distant chatter of echoing voices, recalling Nurse With Wound's similarly nautically themed 'Salt Marie Celeste'. Sad yet defiant piano notes declare the closing of the album and the silence afterwards feels deafening, such are the immersive qualities of this incredible piece of work.

Colohan recorded this on the night of the Blood Moon Eclipse back in September 2015 and something of the magic and unearthliness of that occasion has clearly bled into this release. Quite unlike anything else and steadfastly existing in its own world with no concession to rules or musical conformity, 'Hill Of The Moon' is quite simply a modern masterpiece. Atmospheric, evocative and drenched in an earthy beauty this is an album that is best listened to in the dark, with your eyes shut or when gazing out across a moonlit and vast horizon. Haste ye there; this is not to be missed.' Grey Malkin, The Active Listener

'Hill Of The Moon slowly rises, and as it reaches the tip of its crest an open landscape is revealed. Ripe fields sit sleepily in a corner of kind-looking countryside, the soil is incredibly fertile and fresh and the dull bronze of the sunshine hangs steadily overhead. In the same way that a clasp of light shines onto a stained glass window inside the magnificence of an old, grand church, the music slowly pours through, gradually adding layers and layers as the years pass, restoring and thickening its elderly textures when it begins to show its age.

Hypnotic, almost reverential tones put the music beside the religious, and while it is a devotional of sorts, it’s aimed more at the land itself (in this case, Ireland) than towards any particular deity. The tone herself is extremely heavy, bowing down as a result of pressure instead of an act of worship, surrender or selflessness. Instead, she presses hard, hands clasped in prayer. The music may love the outdoors, but a noticeably stuffy feel permeates the music. The music’s weight can turn fresh air into stale air. In the same way, when religion falls into the wrong hands it can turn peace into a perverted poison. Notes are doubled and held for lengthy spells, punctured by the pursuing omen of leaden, congealing clouds that put an end to the gentle light seeping through the window.

Hill Of The Moon rests in ambient arms, though. It recalls a period long, long ago. The atmosphere has somehow wrenched itself out of the stone, rustling around the grass as something centuries old = mysterious and magical music. It is almost primeval, or at least Neolithic. Lingering like fog, the music slowly swirls. Stuck on the cleft of the hill, ‘Pinnacles’ gazes down on a beloved countryside seemingly removed from the advances of time. It looks much the same as it did one hundred years ago. The slow, sweeping movement of ‘The Ritual Landscape’ and its deep, meditative pauses help to slow everything down, illuminating the music with a contemplative, cool atmosphere. The music smooths out the jarring indentations of the rock with a round, well-shaped sound. And there’s something of nature herself embedded here. The music is a part of the earth, of rock and soil, its soul stuck like a mosquito clad in amber, millions of years old and yet perfectly preserved. It’s as old as the wind, as old as a line of gnarled trees. It isn’t simplistic, though.

Rocks fall, ravens circle. The air absorbs the stark cry. Black feathers flutter against the side of the music, casting shadows as they block the light. As the music progresses, the stars start to shine. The sky is clear, and there isn’t any air pollution. This only adds to the majesty on display. On Tape 2, a chorus ascends to the heavens. The voices are calling out, joining the earlier birds in their song to the sky. At this point, the restricted visibility that the fog left behind disappears, and the music enjoys a lot more freedom. This is evident from the twenty minute length of ‘Fourth Divination (Above The Radiant Lake)’. The sun glitters over the water, illuminating endless ripples and soft, slow motion splashes as it passes overhead.

Incidentally, Hill Of The Moon’s recording was completed during the Blood Moon Eclipse of September 2015.' Fluid Radio

“The mountain has no partner in its glory…
& about Knocknarea itself lies an epic suggestiveness
which you cannot miss if you climb the mountain.
You cannot keep your hold on the present while you are up there.”
William Bulfin